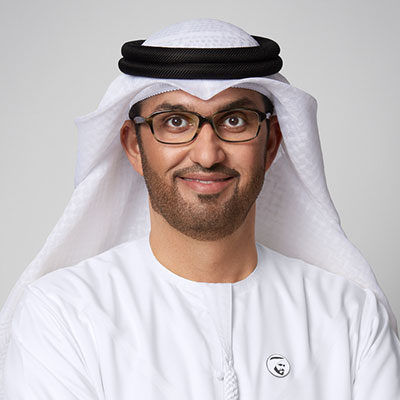 H.E. Dr. Sultan Ahmed Al Jaber is a member of the UAE Federal Cabinet, Minister of Industry and Advanced Technology, and the UAE’s special envoy for climate change. In his role as Minister of Industry and Advanced Technology, Dr. Al Jaber oversees efforts to further expand the industrial development of the UAE as well as promoting in country value and leveraging technology as a key enabler. The core mandate of the ministry is to increase industrial competitiveness and help drive economic growth of industrial sectors, while embedding advanced technology at the centre of the nation’s industrial base.

In November 2020, Dr. Al Jaber was appointed as the UAE’s special envoy for climate change, a role he previously served in from 2010 to 2016, while spearheading the UAE’s clean energy agenda at Masdar, Abu Dhabi’s pioneering renewable energy company.

Dr. Al Jaber was appointed to the UAE cabinet in 2013, where he served as a Minister of State of the United Arab Emirates until July 2020. Combining extensive experience in both the public and private sector, he was responsible for overseeing, developing and enhancing strategic geopolitical, social and economic partnerships with several nations. He was also the focal point for a number of comprehensive strategic partnerships with a number of countries.

Dr. Al Jaber serves as Group CEO and Managing Director of the Abu Dhabi National Oil Company, where, since 2016, he has led a rapid and comprehensive transformation at the direction of the UAE leadership. At ADNOC, Dr. Al Jaber has initiated a program of increased efficiencies, initiated a comprehensive decarbonization strategy, enhanced the company’s overall performance, fostered a more commercial mindset and strengthened ADNOC’s position as one of the least carbon intensive oil and gas companies in the world. He has also guided ADNOC through a number of strategic firsts, including entering the global capital markets for the first time, completing the first ever IPO of an ADNOC business (ADNOC Distribution) and attracting significant FDI from strategic and private equity investors to stimulate smart growth across ADNOC’s upstream, midstream and downstream value chain. In driving ADNOC’s 2030 strategy toward a more profitable upstream, more valuable downstream and more sustainable and economic gas supply, Dr Al Jaber has also led a digital transformation at the company and leveraged technology to maintain and build on ADNOC’s position as one of the most carbon efficient oil and gas producers. ADNOC established the first industrial scale carbon capture, utilization and storage facility in the region, sources 100 per cent of its grid electricity from nuclear and solar power and is electrifying its offshore operations to further enhance cost and carbon efficiency. At the same time, the company is diversifying its portfolio to grow its position in renewable energy and hydrogen.

Prior to taking on the leadership position at ADNOC, Dr. Al Jaber was the Chief Executive Officer of the Energy platform at Mubadala, the Abu Dhabi government’s strategic investment arm. In 2006, while at Mubadala, at the direction of the UAE leadership, he established Masdar, and served seven years as its CEO, guiding its global contribution to clean technology and sustainable development. In 2009 he led Masdar's efforts in the UAE's successful bid to host the headquarters of the "International Renewable Energy Agency" (IRENA). Dr. Al Jaber continues to serve as Chairman of Masdar, guiding its strategic direction.

Dr. Al Jaber also holds several leadership roles and advisory positions and counsels on issues related to Energy, Economics, Sustainable Development. In July 2020, Dr Al Jaber was appointed Chairman of Emirates Development Bank, a key partner in providing financial services for the sustainable economic and social development of the UAE. In December 2020, he was appointed as a board member to the Abu Dhabi Supreme Council for Financial and Economic Affairs, formed to enhance the competitiveness and sustainability of Abu Dhabi’s financial, investment, economic, petroleum and natural resource sectors.

He is Chairman of the Board of Trustees of the Mohamed bin Zayed University of Artificial Intelligence, the World's first graduate-level, research-based AI University. He serves on the board of Emirates Global Aluminium - the fifth largest aluminium company in the world.

Dr. Al Jaber has previously served on the United Nations Secretary General’s High-Level Group on Sustainable Energy for All. He has received various awards including the United Nations flagship award "Champion of the Earth" in 2012, given to outstanding visionaries and leaders in the fields of policy, science and entrepreneurship. In 2013 Dr. Al Jaber was appointed an honorary Commander of the Most Excellent Order of the British Empire (CBE) by Her Majesty Queen Elizabeth II. In 2019, Dr. Al Jaber received a lifetime achievement award from his Excellency the prime minister of India, Narendra Modi, for his contributions to energy security, building bridges to emerging Asian economies and for reshaping traditional energy business models. In 2021, Dr. Al Jaber was named Energy Executive of the Year by Energy Intelligence for his contribution to transforming the energy industry as the world navigates the energy transition.